Chess Scotland have been unusually slow in publishing the SNCL final results. When they are available the results can be shown here.

At this time all I know is that the Kingdom Kings went down and the Kingdom Knights were relegated by half a board point. A bit annoying when you know that Fred on board five turned down a draw and then blew a better position to lose. This is the story of our season, as a lot of draws have been turned down only to lose. Not to mention the games lost from winning positions.

Sometimes it makes sense not to worry about the team result and just to accumulate board points in some of the tougher matches. That won't apply next year though as we should have a team strong enough to bounce straight back up and winning matches is essential. For the first time in three years we won't have Edinburgh Uni pitting their strongest team against us and weaker line ups against our rivals. The best time to play them is during the University champs in February, which they won this year. Also the strong teams Dundee City B and Edinburgh 2 have been promoted out of the 3rd to the 2nd div.


Three pics and a vid from the final round.
Your position stinks 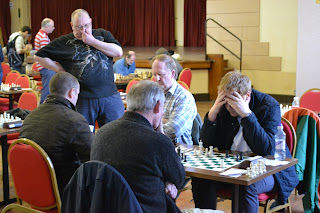 I have a cold, I can't smell anything and the position of the guy next to me smells much worse. 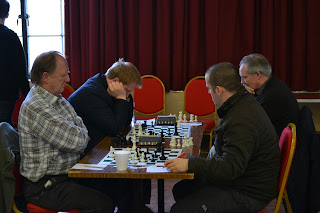 Besides my opponent has used up all of his time looking at crap variations, I can sniff a swindle, here I go! 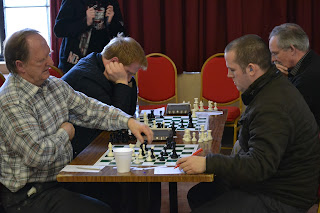