Before the match the team had quite a battle between our 2nd to 5th players about who could play on board 5. Nobody wanted the board 2 slot and board 5 looked easier. Well I won because I have not played much and the fact that I am rubbish helped a lot.

Well I played 8 knight moves in the first 16 and was probably winning by move 12. I was the first to finish, so board 5 was the place to be.

Not a lot to be said about the match as a whole. For once it was smooth with no cock ups. All the matches were comfortable and the only threat was that we might draw a couple. In the end a 4.5/5 win for us was representative of the situation on the ground and as a result Dumfries have been relegated in consecutive years.

Before the final round North Ayrshire and Inverclyde were 1 point behind us and were tied on 18 game points. Inverclyde looked nailed on to get the 2nd promotion spot, as they had the easier final match. However, Inverclyde's board 2 cocked up against someone nearly 600 grading points lower and both teams won 4-1. Both teams had 10 points and 22 game points and their individual match result was a draw.

How do you split them? The organisers had a problem as this situation is not covered by the rules. If we had messed up and drawn our match we would have joined those 2 teams with the same points and game points. Luckily for the organisers there were only 2 teams to separate. I thought chess boxing was a good way to sort it. That was not to be and in the end the teams agreed to bottom board elimination. Removing board 5 from the matches still resulted in a tie, so board 4 had to go. This time North Ayrshire came out on top by 1 point and they will be promoted.

So back to the 2nd division for us and hopefully, now we have a permanent decent board 1 player we should stay there. 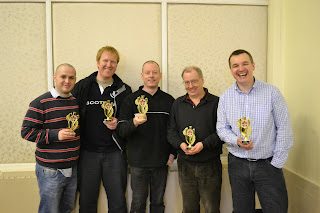 More pics and vids at

Posted by dunfermlinechess at 02:28 No comments: Links to this post

It is still a 3 team race
Dunfermline keeps pace with Badgers at the top of the table with this narrow win.
On top board Dougie dropped a cheap early pawn and although this was the last game finished the result was never in doubt. On 2 Iain got a big squeeze on his opponent's artificial piece placement leading to a quick and 'crushing' win. Michael and Mark got a kind of draughts type position with each controlling opposite coloured squares. Jim and John got unbalanced material but a balanced position leading to a draw by repetition. Bryan seemed to be in control after some spectacular play but lost after going just a bit too negative when Bill offered a dubious sacrifice.


With the allegro league title already gone this was a really relaxed match and at least we finished with a win.


It is about time a different team won, well done to Stirling Bruce!

Posted by dunfermlinechess at 22:44 No comments: Links to this post

Congratulations to Stirling Bruce on winning the first trophy of the season.
Minnows needed a big victory to keep the league alive but it was Tigers who triumphed on the night.
Tigers 8.5-7.5 Minnows