With the exception of Cumbernauld, the Central League teams had some good results in rounds three and four of the SNCL. To be fair to Cumbernauld, they had to face two of the top teams in division one. One of which were another Central League team, the Kingdom Kings. The Kingdom Kings now have won their four rounds in division one and Forth Valley have also won their four rounds in division two. The Kingdom Knights are in clear 2nd place in division three, after scoring two wins, a draw and a loss in their four matches.
The Knights started round three as slight favourites against Oban, but were soon looking like losers, after Stuart on board 4 and I on board two went wrong. Stuart turned his game around to win, after a few inaccurate moves by his opponent. I provided my opponent with a two move help mate on move 16, when I played R-g1, luckily he missed it and I went on to draw. 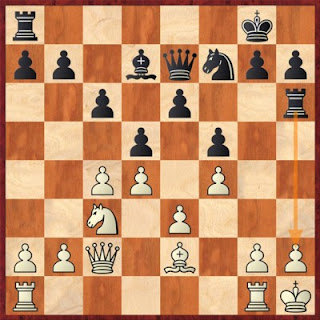 The round four match was against the team most likely to be fighting the Knights for the second promotion spot, Lanark. This was a roller-coaster match and fortunes varied. Fred and I on boards two/three threw away good positions to lose. Stuart on board four again turned around a worse position to win.  The captain on board five was trying to emulate my game in the morning and allowed a forced mate. Despite spending a long time looking at it, his opponent missed it and Peter drew. This bit of luck was crucial, as when Garry won on board one we drew the match. This means that we are one point ahead of our rivals for 2nd place, three points behind the leaders. Only three more match wins for promotion. 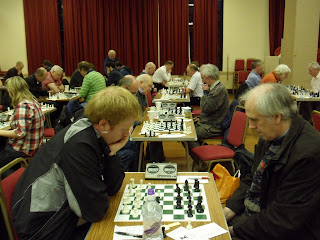 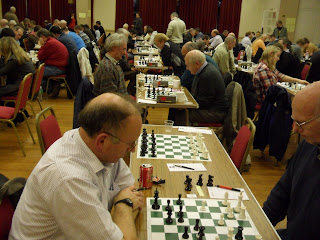 Same match, board five-one. Peter you are a lucky boy! Black soon had tripled heavy pieces on the 7th rank. 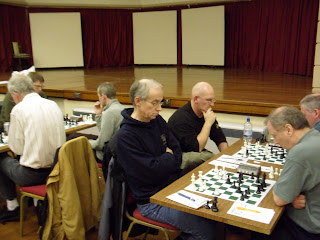 An all Central League, division one, round four match up. Kingdom Kings v Cumbernauld, boards one-four visible. You are a lucky boy also Ian! Accidently sacking a queen for three pieces and getting away with it. 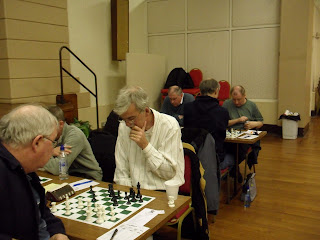 Division three, round four
Posted by dunfermlinechess at 23:16