The crunch match up between the leagues top teams ended up a score draw at 2.5-2.5. With three matches left to play everything is still in the balance. The return away match at Grangemouth next February will now have to decide who wins the league.
For a long time the match look like going Dunfermline's way. We were better on all five boards and certainly much better on boards one, two (with accurate play in a complicated position) and three. In the end only board one converted the win, with boards two, four and five ending as draws.
The draw result was really down to me, as with the game at the SNCL I lost control of a game that I total control over. I knew I had a better position, I just failed to find the right moves. At the moment, I am messing up too many games with my poor decisions. Below are three of the many critical points in the game where I had a chance to seal the win.
24.   c5 gives black a good advantage. 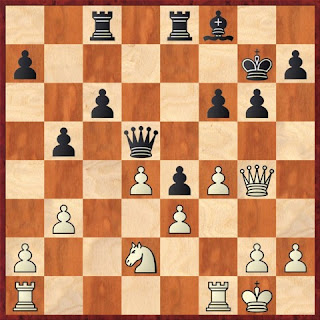 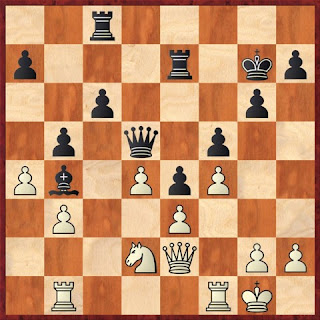 Black has played poorly to allow this position, but even here 43.  Q-c2 leaves white in a mess. However, by this point I was short of time and rushed my move, ggggrrrrr. 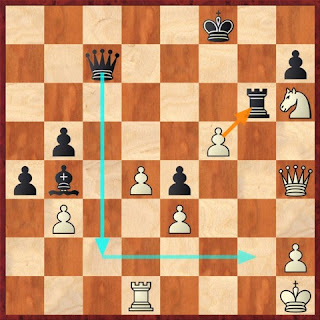 2.5-2.5
The captains match report:
A match whose final result got ever more difficult to predict as it progressed.  On board one Ian R gained Q for R advantage eventually converting an awkward ending.  On two Dougie played one of his speciality sacrifices leaving both players with a multitude of captures where anything could have happened but it all quickly simplified.  On three John missed two chances to take advantage of a loose piece but after that the position turned against him ending with a mate in one blunder.  Board four was mainly about a cagey but balanced ending. On five Michael was well on top but Hugh battled gamely to put his opponent under severe time pressure so that Michael was obliged to offer a draw.
Posted by dunfermlinechess at 01:26