A tough battle tonight, made more interesting by some absences. Cumbernauld were missing Ian Marks,while Dunfermline were missing Gavin and Jim. Garry moving to Jersey did not help Dunfermline's cause either.


On paper Dunfermline was a little stronger, but not by much. Ian on board one was the only clear rating favourite. This game concluded very quickly in our favour, which quickly settled the nerves. Only for the nerves to be rattled soon after. Glynis was very quickly two pawns down and losing, while Stuart blew a nice position to lose early on.


Quickly doing the maths I realised that Michael and I had to win on boards two and three. Not an easy proposition, as Michael was doing ok and then suddenly wasn't. My game was an interesting, but tough battle and it was not clear who would win. An upset was on the cards and our Captains body language gave the game away, he expected us to lose the match.


Then late on things suddenly turned around, George played very passively to allow Glynis to blockade things and he had to concede a draw. Now 1.5/2 was needed for us to win, even so the captain and I thought that we would still lose. As Michael was worse and I expected to draw.


Then pretty much at the same time Michael and I found winning combinations, which killed the remaining games off. David even turned down Michael's late draw offer in a forlorn attempt to rescue the match, but had to resign just a few moves later.

Well done to Cumbernauld for giving us kittens and making it an exciting match. I am sure they will be upset that they missed their chance to beat us.
Note: After being told that Ralph missed a win against me, I checked this out with Rybka. Who tells me that there was one opportunity on move 34. This is when I made a mistake by playing Bc4, allowing an exchange sac on c4. This was easy to miss and I did not see it either, if I had I would not had played Bc4 :) Other than that and Ralph failing to play Rc7 on move 39, this was a tough battle that was well played by Ralph. 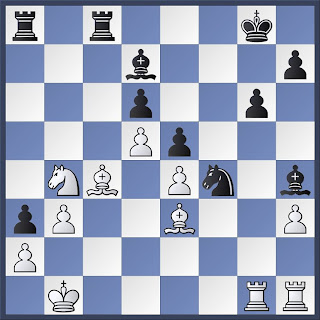 
Dunfermline white on boards one and two, Cumbernauld white on three, four and five.
Posted by dunfermlinechess at 00:58