High drama at Grangemouth. Grangemouth V Dunfermline played on the 9th of Feb 2011

The maths were simple, if Grangemouth won, or drew, they would almost certainly win the league. Even with two matches left to play. If Dunfermline won, they would most likely win the league, although with less room for a slip up. The closeness of the playing strengths pointed to a classic match, that was likely to ebb and flow. The match went onto live up to this billing.

The match started off in a dull way to begin with. Dunfermline claimed a draw by three fold repetition after only 14 moves. Given that it was one of the boards Dunfermline needed to win on paper, it was probably not the best decision. There was a query about the rules, but there were two arbiters in the room. Gavin who claimed the draw and the very experienced Donald Wilson, who impartially provided his advice and the game was declared drawn.

At this point all the other games were still in their opening phase, although Dunfermline looked to be slightly more comfortable. Then Michael on board five offered a dubious bishop sac, which if John had taken, would have seen him with a clear advantage. Luckily for Michael, John did not and his position fell apart. Although, Michael did try to make heavy weather of it.

My game on board three was level until move 35, Garry on board two, looked to have a difficult but defendable position and Ian was the exchange for a pawn up on board one. Had things stayed like that, this would have been enough for Dunfermline. However, chess is never that easy. Alan on board one managed to survive and draw and Garry on board two, went wrong. Now the match was finely poised at 2-2 with my match on board three against Doug becoming the focus of everyone. Things were looking good for Dunfermline, as I had secured a big advantage from move 35, which just got bigger. However, time was running short and the position was too complicated to work out in the time available. We were both flying by the seat of our pants. My 39th move Qg2 created the position below. According to Rybka, the advantage to white is in excess of +10. 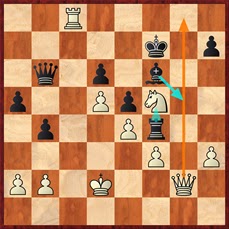 Black has run out of moves and must offer material to prevent mate. Bg5 was the choice and my problem was can I take the bishop and avoid trouble on f2. A few minutes left on the clock and I had a meltdown, what do I do?. Qxg5 is more than +12, Nxd6+ is +8. The easy answer is that I played a poor move Nh6+, thinking that there must be a mate. This was not fatal, but later forgetting the Bh6, Rf4 discovered check was and Grangemouth won the match and the league by the unlikely score 3-2. Now I know what it like to score an own goal in title deciding derby game.
Posted by dunfermlinechess at 22:52