Dunfermline are looking to win 4 out 5 possible competitions this season. This match represented the 3rd of these ambitions. With the 4th being contested next week with the B team going for the 2nd division title against Grangemouth B.

This match took place at Dunfermline's home venue, the Del Farquarson Centre. On paper this final looked like the best and most exciting match up of the season. There is little doubt that these two teams are the strongest in the league over seven boards. Both teams were really up for this match and none of the games were dull. Even the draw on board one was a ding dong battle, ending with black forcing a draw to secure the match. Although it turns out black could have won it instead, something pointed out by Peter Wynn in the pub. But why risk the match trying to win a queen and pawn endgame? Forcing the draw was the right thing to do for Ian Robertson.

All the other games were decisive with three good wins each. Each of the winners played really well and the final result of 3.5-3.5 was a very fair result. However, Dunfermline's wins on boards two and six, as compared to Grangemouth wins on boards three and seven, was the decisive factor in the board count for Dunfermline. In comparison Grangemouth only bettered Dunfermline with a win on board four to Dunfermline's win on board five. A little tough on Grangemouth, but the tie-break is the only way to decide a cup final.

It was a real privilege to take part in such a hard fought, exciting and well played match. 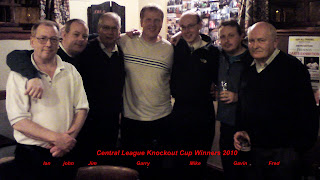