The league table closed up again as Dunfermline dropped its first points.
On top board the computer says it was a fairly accurately played game till move 25 with Ian snatching a pawn and should later have done more with it.  That should have been academic however as, in the rush to the first time control, both players overlooked that Ian could have won a piece on move 28 by advancing his Q one square further along the diagonal.

Board 2 was fairly closed throughout but John missed an interesting possibility of giving up Kt and B for R + 2 pawns which looked good.

According to Kenny he thought Iain played too passively and ended up dropping a pawn or two.  Bryan's last move before the time control was a spectacular trapping of his own Q which was unfortunate as otherwise he still had a pretty tenable position.

Matthew played very solid and took the pawns on offer while his opponent activated his pieces.   Matthew refused to return the material and instead he escorted the soldiers forward for a neat win. 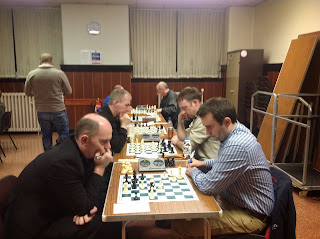